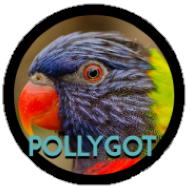 Now I've Gone and Done It!

I've built an app for myself. Well, it's not just for myself. It's for anyone who wants to learn any of these languages:

How does it work?

PollyGot is pretty simple. You pick any language and start a six-minute countdown. In that time, you complete as many translations as you can while making the fewest mistakes. At the end of those six minutes, your accuracy and speed will determine your progress. Once you've reached the end, you're done.

Great! So this will make me fluent in thirty days, right?

Nothing will make you fluent in thirty days, and anyone who sells that lie should be shot by a firing squad. However, you will acquire each language's syntax, phonology, and orthography as you work through these modules.

In fact, it's not really right to call them modules. Modules imply that they're built from the top down. This app takes a bottom-up approach. There is no lecture. There are no guidelines and rules to memorize. Instead, I give everything short of filling in the answers for you, to guide you to the anticipated responses.

One goal of mine is to eliminate the feeling of being quizzed. That's how most other apps work. It's these few steps: "You tried. It scores. You failed? Try again." Rinse and repeat. And unfortunately, these apps do more rinsing than repeating.

Mine is more like this: "You try. It tracks. You tinker. You submit. You compare. Try again." The catch? With PollyGot, there's more repeating than rinsing.

Also, unlike everything else in the electronic language-learning market, my database contains the whole, unedited range of language. I can say with confidence that this is the only app that will teach you both, "I come from California," and, "Here comes the milk truck!" in ten different languages. My only rule is that sentences be sentences. The rest is left to math and translation accuracy.

There is also one other major difference. You can choose to practice your next language in all of the languages that you know. That not only reinforces your native language skills. It trains you to connect all of your languages together.


That all sounds good. So, where can I download PollyGot?

If you use an Android device, you can download it here.

Shut up and take my money!

No need to tell me twice.